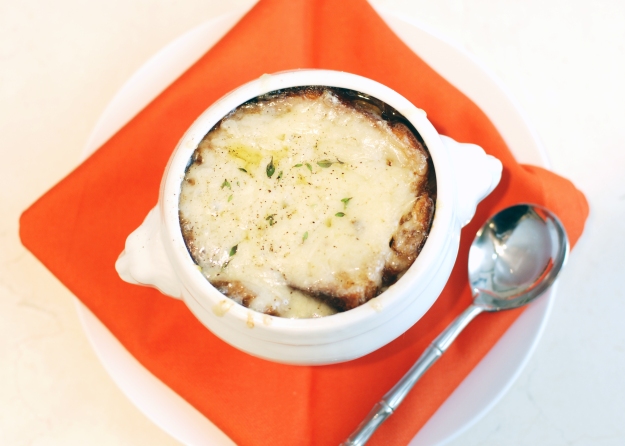 END_OF_DOCUMENT_TOKEN_TO_BE_REPLACED

I look forward to football season more and more. With it comes a welcome cooling trend from the summer heat, festive weekends and, of course, addictive snack foods that go best with sports. I don’t know all the stats or follow the majority of the games, but I’m just as happy being along for the ride (and around for a lot of the food). For a recent UW game, I decided to change up the usual chips, burgers and hot dogs for some good ol’ fried chicken.

END_OF_DOCUMENT_TOKEN_TO_BE_REPLACED 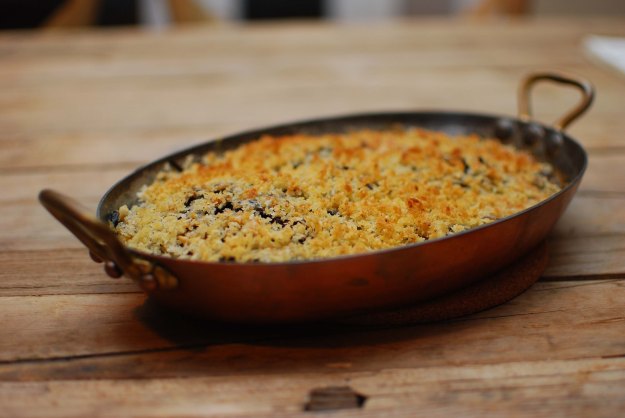 I’ve had a bit of a love affair with this copper gratin dish because it’s unlike any of my other kitchen equipment. I have some great pans and knives, but nothing that feels as authentic as this dish. My boyfriend’s mom brought it back from a trip to Europe and she gifted it to him a couple of years ago. I often walk by it hanging on the metal kitchen rack and think that I should whip up some classic, Julia Child-inspired French dish, like Sole Meuniere. Even though it doesn’t have the built-in flavor of a cast iron pan that has been passed down from previous generations, I imagine it has a rich history in a French farmhouse kitchen.

This past Sunday, for our Mother’s Day feast, I thought it would be the perfect dish for a gratin I’d be eyeing in my Smitten Kitchen cookbook. My mom and dad really love almost anything I cook (in true supportive parent fashion) but I think that they went a little nuts over this one partly because my dad has loves anything with rice, and my mom gets very excited when you let her know gratin is in her future.

I used to think (up until this week) a gratin was really just a more sophisticated French-style casserole. But I have since learned that a gratin is specifically baked in a shallow round or oval dish to achieve more surface area for a buttery, breadcrumb topping. I loved this particular version because you get all the nutty, crunchy cheesy bits of a mac and cheese or creamy cauliflower gratin, but the wild rice mixture is lighter. The caramelized onions really make the dish in my opinion, because they give that sweet/savory flavor and bring out only the best parts of the kale (which sometimes I think can take on that stinky cabbage quality if it isn’t cooked right). I know Smitten says to use Emmentaler or Baby Swiss cheese, but even the rich grocery store I went to didn’t carry it. I used Gruyere, a fine substitute and a common choice for other gratin dishes, and I think it worked out just perfectly. The finished, bubbly gratin was a great side dish set on a rustic table with the Chicken Milanese I also made.

Try not to be deterred from making this because of the nearly one hour cooking time for the rice. It does take a while, but it’s well worth it. You could even make it a day ahead, assemble and refrigerate the dish. One other thing to note, the recipe says it serves 10-12, but I really think it serves more like eight people. 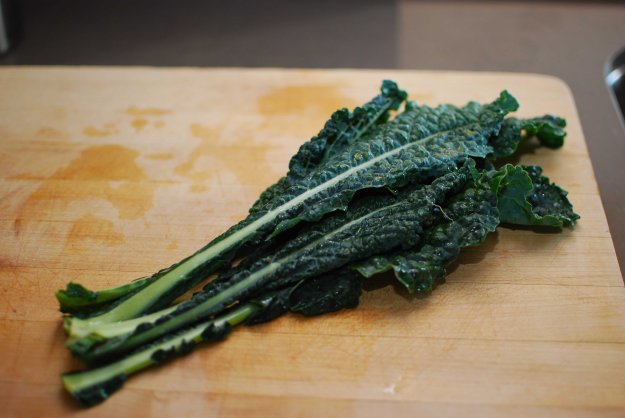 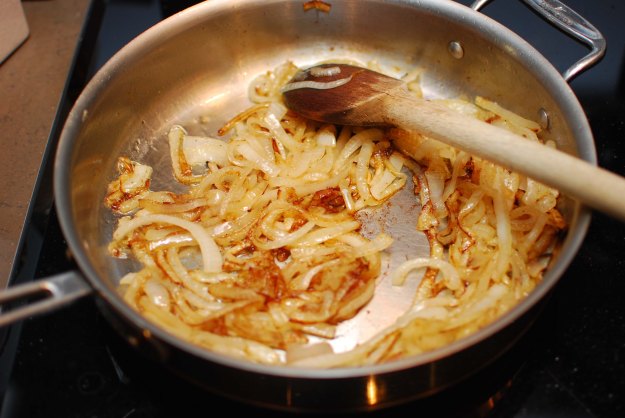 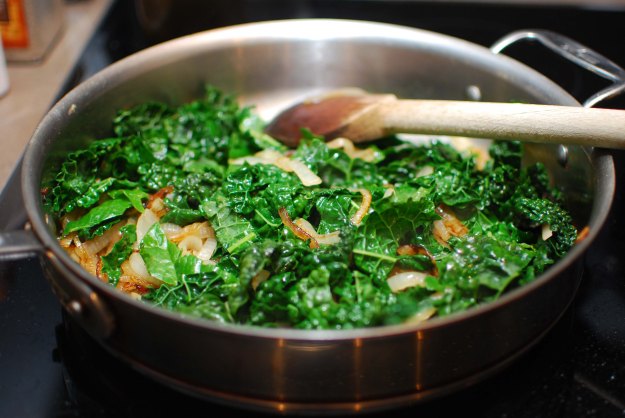 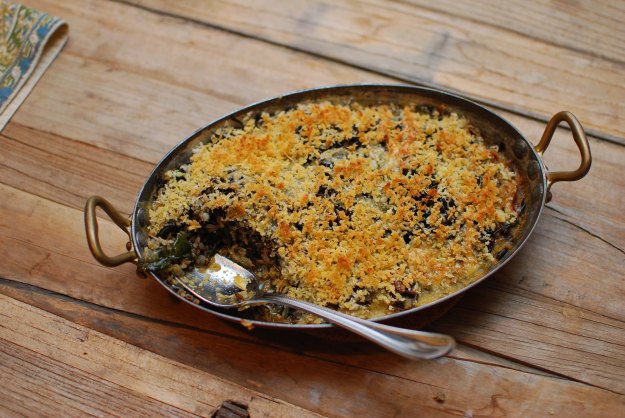 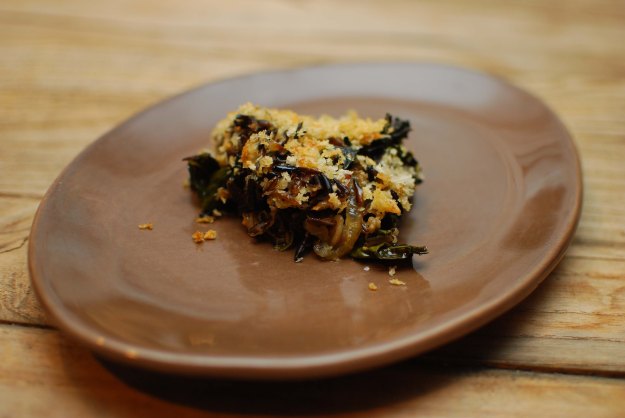 From The Smitten Kitchen Cookbook by Deb Perelman

salt and pepper to taste

Cook the rice according to package directions.

Preheat the oven to 375 degrees.

Meanwhile, caramelize the onions. Heat the butter and olive oil in a large, heavy skillet over medium-low heat. Add onions, sprinkle with salt and a little pepper, and cook until they’re tender and sweet, stirring occasionally, about 30 minutes. Add the kale ribbons, and cook until they wilt a bit, about 5 minutes. Stir together the onion-kale mixture, wild rice, and 1 cup grated cheese in a large bowl. Season to taste with additional salt and pepper, if needed.

Assemble the gratin. Use 1 tablespoon butter to generously coat a 2-quart baking dish. Spread the wild-rice mixture into prepared gratin and pour broth over it. Sprinkle remaining cheese over gratin. Toss breadcrumbs with 1 tablespoon melted butter and salt and pepper to taste; sprinkle over cheese.

Bake for 30 to 35 minutes, or until a little bubbly and beginning to brown on top. 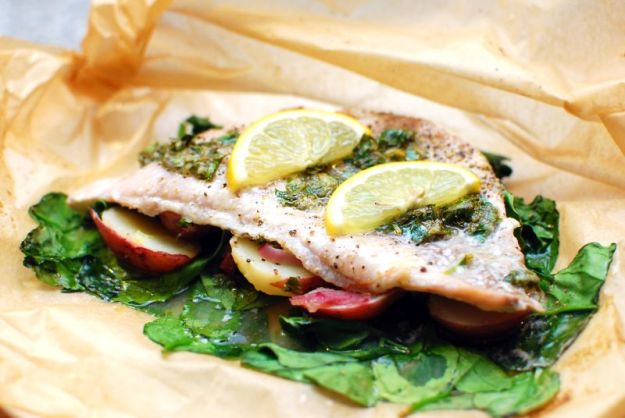 A clean, citrus-infused piece of white fish is now what I crave on an evening when I want to feel not just fed, but nourished. I discovered a version of this meal while doing an 8-week workout challenge with a group of friends at the office, and gravitated towards the two major ingredients: lemon and ginger. I’ve tended to avoid baking fish at home because I always think it’s going to make our modest apartment smell like a Red Lobster (no offense to the home of fried fish). However, I took the time to make an extra stop at our local Santa Monica Seafood to get something that was actually fresh and I think that’s the key to a fishy-smell-free kitchen. That day it was Pacific Rockfish, but just go with anything that is wild caught and hasn’t been frozen.

I also love this dish because it’s so simple to assemble, and yet comes out looking very impressive for guests. ( I’ll take any chance I can get to look like a culinary sage when I’ve spent less than an hour moving around the kitchen primarily focused on drinking pre-dinner wine) You can transfer the pouches straight onto plates and let your diners open them to get that initial waft of citrus and herb. It’s also pretty difficult to overcook since the fish gently steams in the pouch. I’ve definitely left it in the oven for a few extra minutes and no one has been the wiser.

You could opt out of the potatoes in favor of less starchy vegetables, but I like to make a few extra to soak up the fresh, bright broth that develops in the parchment. It’s very important that you use parchment paper, rather than foil, for recipes like this one that include acidic ingredients. Though I haven’t tried it, I’m told combining foil with ingredients like lemons, tomatoes or white wine will create a really bad taste. I’ll take their word for it. 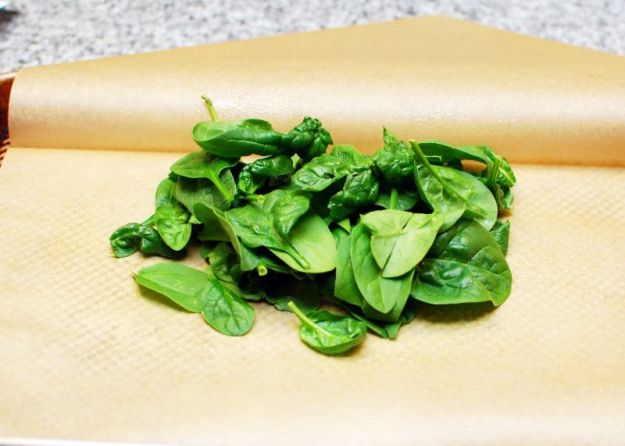 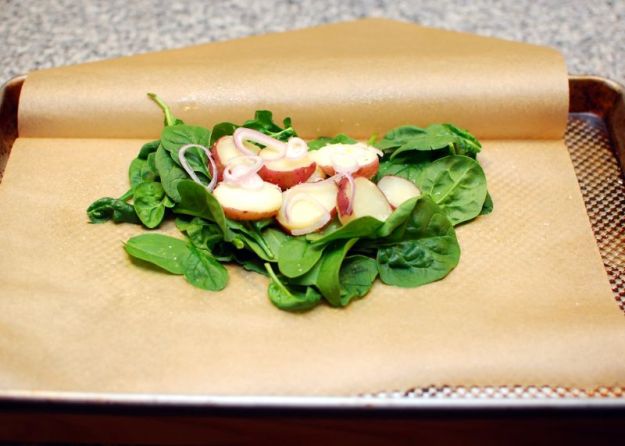 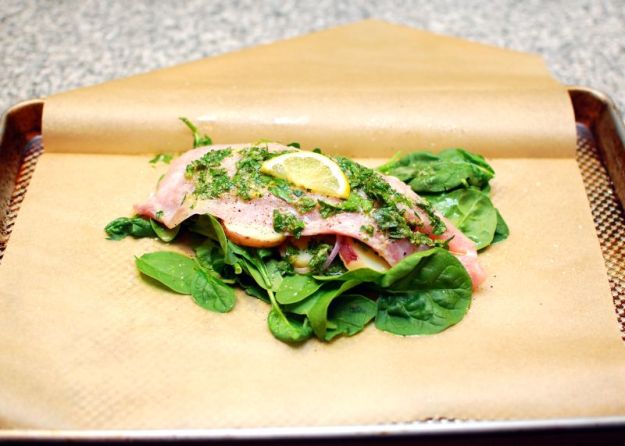 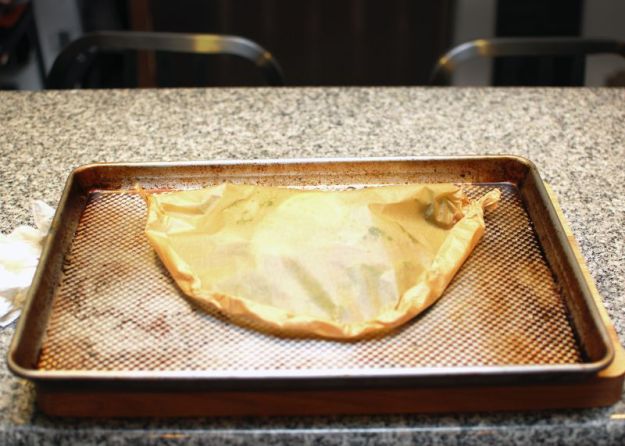 Juice of one lemon, extra slices for garnish

Salt and pepper to taste

1. Cut two pieces of parchment paper, fold in half vertically and place on a baking sheet. Spray the inside of the parchment pouch with cooking spray. The folded piece of parchment should cover about half the size of a half-sheet pan.

2. Boil potatoes until fork tender. Once cool enough to handle, cut them into slices and set aside.

3. Combine grated ginger, lemon juice, olive oil and parsley in a small bowl. Add a pinch of salt and pepper. It will look thick, almost like a pesto.

4. Layer spinach, sliced potatoes and sliced shallot onto one side of a piece of parchment. Sprinkle with salt and pepper.

5. Season one side of the fish with salt and pepper, then lay on the bed of vegetables. Spoon half of the lemon-ginger-parsley mixture over the fish and top with a slice of lemon.

6. Starting at one side and working towards the other, roll and pinch the edges of the parchment paper together. Twist both ends of the pouch tightly so that the final pouch looks like a paper calzone. Repeat with the second piece of fish. 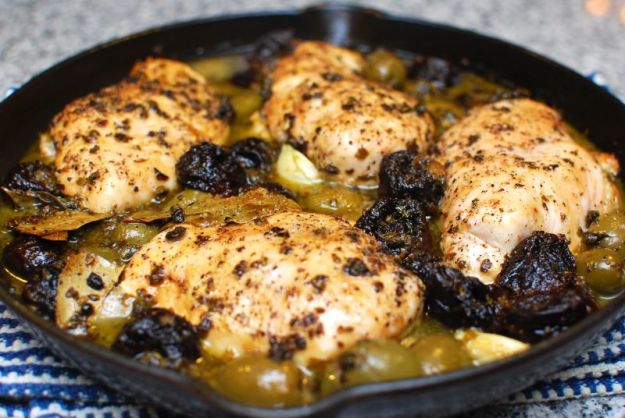 I consistently reach for the big bowl of lemons on my counter and a handful of herbs whenever I decide on a “something chicken” dinner. Even though these components are simple, they are always the most satisfying to me. That is, until I tried Chicken Marbella.

This dish comes from Sheila Lukin’s iconic Silver Palate cookbook, and develops such a complexity with minimal effort. Lukin began incorporating Mediterranean flavors into her food when she started a catering business in the late 1970s. She then opened The Silver Palate food shop in New York Chicken Marbella was one of the first main dishes served at the shop.  See the full recipe here.

I was introduced to this dish a couple of years ago at a friend’s bachelorette weekend in Lake Tahoe. My friend’s sister marched into the cabin with about four Ziploc bags of  chicken parts marinating in olives, prunes, capers, garlic and spices. I hovered in the kitchen and watched as she added white wine and brown sugar to trays of chicken in the oven. The result was tender chicken in this unique, briny sauce complemented by the candy-like prunes. She spooned the chicken over herb cous cous and I have not forgotten it since.

To recreate this dish in a shorter amount of time on a weeknight, I used two pounds of boneless, skinless chicken breasts. I’m normally all for the amplified flavor of bone-in, skin-on cuts of chicken, but for a quicker version this worked splendidly. The key with Chicken Marbella (and I can’t stress this enough) is to marinate overnight. Trust me on this one, you don’t want to shortchange yourself.

Note: If you opt for the boneless version, cooking will take about 30 minutes less. Just make sure the chicken’s internal temperature reads 165 degrees on a meat thermometer. 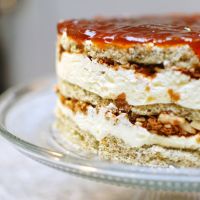 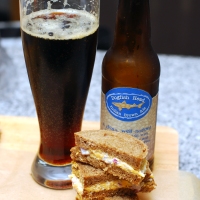 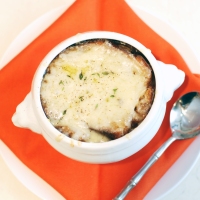 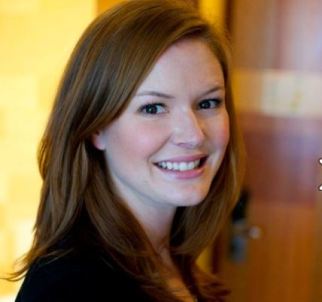